Thirteen Luxurious Trains Around the World That Will Amaze You

There’s something quite alluring about traveling in a train; the scenery becomes hundred times more beautiful than on a plane or a car, and it’s a very romantic ride for some reason.

Although traveling in a train is a fun experience overall, there’s just something about traveling on a luxurious one. The seats are far more comfortable, the experience is far more enjoyable, and there’s just a waft of luxury in the air.

If you’re fascinated by luxury and trains, take a look at the thirteen most fabulous combinations of the two; from Europe to Asia, these are the top luxurious trains in the world:

Welcome to Asia, where trains give a whole new meaning to luxury.

There’s a reason the Cruise Train Seven Stars is often referred to as the world’s most luxurious train; it brings together Japan’s renowned culture and a modernity that makes you beg for more.

The cruise Train Seven Stars is a sleeper train running since 2013. It holds the claim as the first luxury sleeper to cruise in Japan.

But even more beautiful than the Cruise Train Seven Stars is its destination; rushing through the Kyushu island, this train takes travelers on a majestic ride filled with stunning views of mountains and the sea.

And even more unique is how you get a ticket; thanks to its high demand, the train requires every wisher to enter a lottery, where the winners get to pick a luxurious itinerary.

Dating back to 1993, the Eastern & Oriental Express is a luxurious train that travels through the enamored cities of Kuala Lumpur, Singapore and Bangkok. For any traveler who’s looking to travel through one of the most beautiful cities in Asia, this luxurious train is the one.

And what makes it so opulent? The train boasts a smooth cherrywood paneling that extends throughout the cabins, in which you’ll find soft seaters featuring Thai silk. To maintain its impressive coat, this train even requires travelers to wear glamorous evening dresses for dinner.

Explore India aboard the Maharaja’s Express, a luxury sleeper that offers an impressive itinerary to Mumbai, Jodhpur, Agra, Delhi and more beautiful cities. The Maharaja’s Express comes with private cabins with your own butler; from every nook and cranny you’ll find a luxury befitting royalty.

And if you’re looking to spice things up, book its presidential suite cabin, fancier than the name!

If you were fascinated by the Darjeeling Limited, step aboard the British Pullman, a luxury train fashioned after the personality of Wes Anderson.

This train offers beautiful carriages with unique themed ride; embark on an enticing murder mystery or get a ticket to a first-class ride with star chefs, with British Pullman, you’re looking closer to glamorous dreams.

Cross the luscious green scenery of Harry Potter with the luxury of a five-star hotel, and you’ll get the Belmond Royal Scotsman. This train travels through some of the most majestic and mystical hills of Scotland while keeping a sophisticated vibe inside. Aboard the Belmond Royal Scotsman you’ll find the most wondrous spa, that makes it impossible to believe you’re aboard an Edwardian train.

Many people are surprised to learn that the Golden Eagle Trans-Siberian Express is a century old, because the elegance and the opulence you’ll find is simply unparalleled. The Golden Eagle chugs through Russia’s eastern coast and invites travelers on half a month’s journey with dance parties and live concerts.

The Presidential Train in Portugal

For those planning a trip to the Douro Valley, Portugal’s Presidential Train presents a luxurious experience boasting amazing private cabins and mesmerizing sceneries.

The Presidential Train offers a fine-dining experience curated by the loving hands of celebrated chefs; for lovers and fine-dining enthusiasts, this train is perfect in every sense of the word!

The Transcantábrico Gran Lujo in Spain

Hop aboard the Transcantábrico Gran Lujo, a train with a massive history lesson. For anyone fascinated with antique cars and trains, this one’s the best because it still upholds 4 original Pullman cars from 1923.

The Transcantábrico Gran Lujo takes travelers back to the past with the added luxury of the present, and gives them a ride through Spain they’ll never forget.

If you’re thinking of traveling from England to Venice, this train is the one for you. The Venice Simplon-Orient-Express inculcates the culture of various nations and brings you diversity in a cabin.

Feast on standard Fish’n’chips or take a sip of fine champagne while you rumble through England’ terrain and enter one of the world’s most mystical places.

Europe isn’t the only place you’ll find a luxury train; hop aboard this one in Africa:

The Rovos Rail is an exciting train that cruises through Pretoria and cuts right into Cape Town. The Rovos Rail luxury train features elegant seating cabins with private sleepers.

Since it typically takes three days to reach your destination, the Rovos Rail takes you on a magical journey where you can explore the beautiful African landscape from its open-air balconies.

There’s one luxury train in South America that make it to the top 13; meet Belmond Andean Explorer:

Begin your journey in Cusco and travel across the Andean Plains until you reach Lake Titicaca. The Belmond Andean Explorer gives you a few things to boast about; a luxury cabin paying homage to their Peruvean roots and the softest alpaca wool beddings.

The Belmond Andean Explorer is also one of the highest luxury trains in the world!

If you’re traveling to the sweet nation of Canada, you’ll find its train one of the most luxurious ones:

The Canadian in Canada

With a simple name but a far more luxurious experience, the Canadian offers you various routes from Vancouver to Toronto. The Canadian allows you to embark on a four-day continuous journey where you’ll stop in dainty towns, cross a few mesmerizing waterfalls and even chug by the Rocky Mountains.

The Land Down Under offers you a taste of luxury mixed with its classic Aussie roots:

The Ghan in Australia

The Ghan Expedition is a premiere luxury train that sets off from Darwin and speeds through the beautiful Outbacks to reach Adelaide. The Ghan is quite the amorous experience for anyone who wants to experience the Aussie land but skip the dusty outbacks; with the Ghan, a simple train journey becomes majestic. 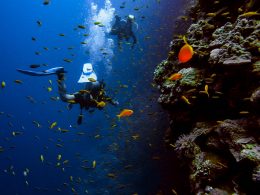 The Most Unusual Diving Spots: Spitsbergen and Falkland Islands

Looking for places where you can discover more of the underwater world? Are you one of the expert…
83 views
1 share
1
0
0 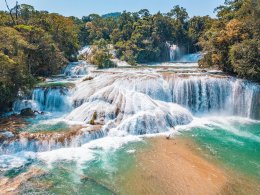 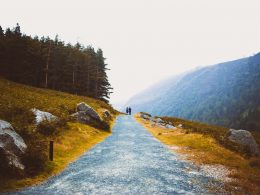 Travel & Fall In Love: 6 P.S. I Love You Filming Locations To Visit In Ireland

My film writing professor once told us, “if you want to make people bawl their eyes out, you…
92 views
1 share
1
0
0 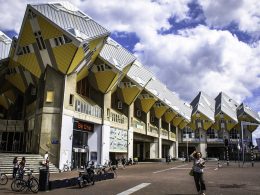